Students in Justin Kalef’s “Logic, Reason, and Persuasion” class at Rutgers University take a deep dive into some divisive issues.

And they can expect, over the course of the semester, to have their positions challenged—perhaps by the person sitting next to them. 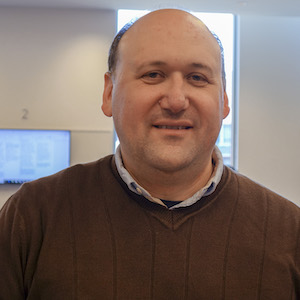 Kalef, a teaching professor in the Department of Philosophy, School of Arts and Sciences, gets this undergraduate course underway by surveying students on such topical hot buttons as abortion, gun control, and tax policy. “Then I put them on teams for the rest of the semester with people who disagree,” Kalef says. “They have to sit with, make alliances with, and do collaborative work throughout the course with people whose positions they oppose.”

He’s not out to provoke a collegiate version of Crossfire. His goal is for students to develop the skills that a good philosopher—and engaged citizen—should have: the ability to master a complex issue, construct an argument, and meticulously evaluate how well it holds up against those of their peers.

“It’s really easy to criticize others, so I put an emphasis on finding flaws in your own reasoning,” Kalef explains. “That’s the advantage of having teams with diverse views. There’s always going to be somebody who says: ‘Wait, how do you know you’re right?”’

The novel approach reflects Kalef’s passion for teaching. He is the first-ever director of teaching innovation in the philosophy department at Rutgers—a department routinely ranked among the top three philosophy programs in the world.

Dean Zimmerman, the department Chair, says Kalef is one of just several teachers worldwide who are applying a team-based learning approach to philosophy. And the results are revelatory.

“Rather than lecturing to students and debating with the more ambitious ones, Justin’s goal has been to ensure that every student does some original philosophical work every day,” Zimmerman says. “In addition to creating challenging, engaging activities that push students to excel at doing philosophy, his approach has the benefit of making students responsible for their learning — not just to themselves, but to one another.”

Kalef's job also includes working with doctoral students and part-time lecturers, helping them grow and develop into effective teachers. He also creates innovative new undergraduate courses, including a series of “Rutgers Philosophy All Stars” online courses in which students study the work of the department’s great scholars.

For the “All Stars” courses, which will later be released as Massive Open Online Courses (MOOCs), Kalef worked with James Chun of the Cyberlearning Innovation and Research Center (CIRC) to create a tightly structured course that—even in the online format—offers ways for students to collaborate with one another and with Kalef.

Senior Daniel Cappell said the combination of online work and then an in-person meeting of the entire class on the last day were effective, and even inspirational. “In the online forums you get to know other students through their writing style and their positions,” he notes. “Then when you see them in person, the personal element comes through and you feel like you really know them.” He adds that the course inspired him to become a philosophy major.

Meanwhile, students in the “Logic, Reason, and Persuasion” course—most of whom are not philosophy majors—said they emerged from the experience with a new depth to their thinking.

“The course takes you a step backward so you can observe the way you argue,” says sophomore Ying Zhang. “It forces you to ask yourself: ‘Am I arguing my feelings or arguing the facts?’”

Each group must complete weekly collaborative assignments and a final project in which they take a position on an issue and demonstrate expertise down to the smallest details. Students must also show a command of the techniques of argument—claims and counter-claims, objections and responses. On the final day, the groups present physical tables of supporting and opposing arguments.

“A lot of work went into these,” Kalef says. “I can see from looking at the tables whether they have done a good job or not.” 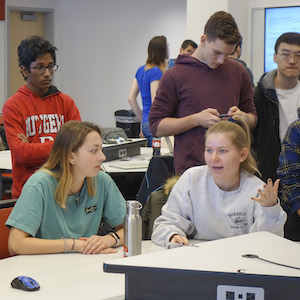 Luke McCarty, whose group focused on whether sex work should be legalized, started out strongly supporting legalization. “But over the course of the project I changed my mind,” says McCarty, a microbiology major. “I found many statistics showing that legalizing prostitution doesn’t mitigate sex trafficking, and in many cases can increase it.”

Lily Black, an environmental sciences major, said the course has had a lasting impact. “I wanted to learn how to argue without emotion,” she states. “Now, in my everyday life, I analyze arguments like I have been taught in this class.”

For Kalef, the job of teaching has long been a personal mission. His mother and her parents were teachers. And Kalef says he struggled as a student.

“I was more aware than most people of the difficulties of learning from others,” he says. “When I found someone who could teach me, I asked myself how it had happened. It’s a question my evolving work still seeks to answer today.”