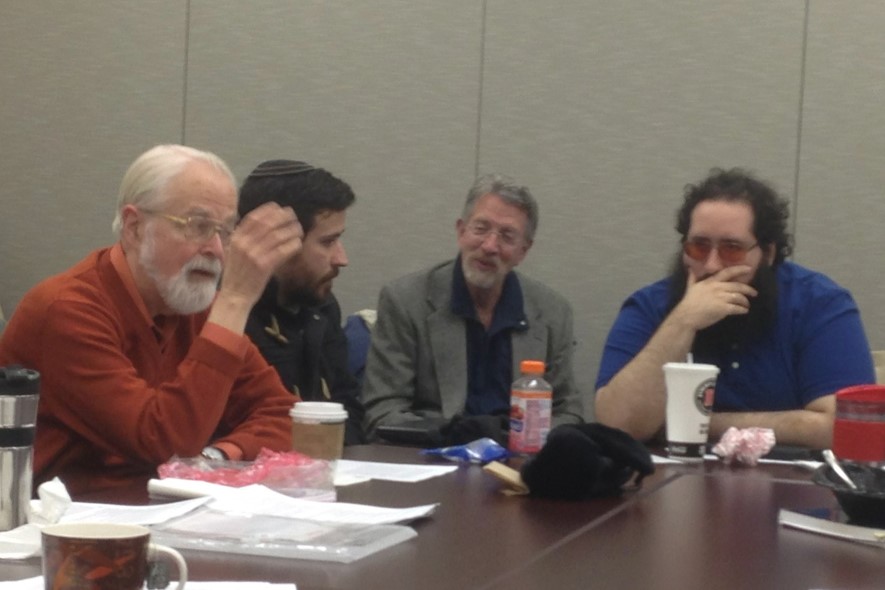 In the Spring of 2020, Brian Leftow and Dean Zimmerman will be co-teaching a course on contemporary issues in the philosophy of religion. The seminar will begin with discussion of the promises of, and problems for, Perfect Being Theology; and then turn to some related matters, such as divine eternity and immutability. As part of the seminar, Edwin Bryant will discuss the role the concept of a perfect being has played in some Hindu theology.

Topics in Philosophy of Religion:  God, the Intellect, and Perception

The graduate course was taught by Dean Zimmerman (Rutgers) and Howard Robinson (University Professor at Central European University, and Senior Fellow at Rutgers Center for the Philosophy of Religion).

Zimmerman concentrated on the relation between perception and God. Robinson’s emphasis was on the Intellect and God.

Zimmerman surveyed early 20th Century theories of consciousness and perception, beginning with William James (“radical empiricism”), Bertrand Russell (“neutral monism”), and the views of some of their contemporaries (naïve realists and critical realists — including G. F. Stout, an important but largely forgotten psychologist and philosopher). Late 20th century theories of perception were then discussed (e.g. Chisholm, Goldman, Dretske), which led up to William Alston’s work on perception generally, and the perception of God in particular (in his book, Perceiving God). Recent work on perception (by Howard Robinson, Matt McGrath, Susanna Schellenberg, and others) was then studied for its relevance to Alston’s project. Alston relies on William James’s Varieties of Religious Experience, which was read alongside more recent psychological studies of religious experience.

Robinson then discussed the irreducibility of intellect/thought, drawing on two major kinds of arguments: first, the failure of mechanical and computational models; and second, a quite different argument based on the thesis that intellect must be ontologically fundamental, whilst not being physically fundamental. The latter argument — which constitutes Part II of Robinson’s recent book, From the Knowledge Argument to Mental Substance (Cambridge: 2016) — involved discussions of vagueness and the “Eleatic Principle”. Having defended the irreducibility of intellect, he then looked at reasons for believing that the Platonic realm of “abstract entities” is really a form of divine nous — a mode of understanding, not a set of entities — and that without the priority of nous there could be no finite or physical world.